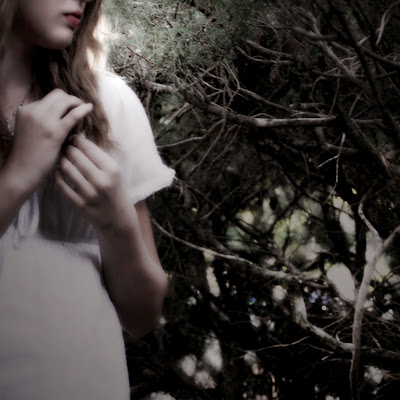 It was idleness that brought her to the mist that auspicious morning. She could feel the damp cover her like tiny pearls dancing on her skin.  Through the hazy stream of restlessness she searched for bits that emulsified a blush in her humanity, some little flame to keep her warm like fresh winter down.
Behka loved the color of moss, the tangibility... a stone covered in cool with the illusion of warmth as her toes rubbed over it.  It was the garden and its pâté table of mysteries that stirred her as she lifted a single gardenia from the ground.  She marveled at the strength of the waxy, dark green leaves that dangled from her affectionate fingers, the delicate petals of vibrant white that would surely turn to brown at the touch, already showing tinges of amber from the fall to the cold ground, the pungent fragrance overpowered her at the idea of contrast.
Never had she seemed so enchanting to the mist, so perfectly beautiful in folds of thin white, her nightgown snagging on thorns of Barberry as she fumbled for the path.  It was between shadows that he could see the specks of golden light in her hair.  He imagined her lying on the warmth of her pillow a few short moments ago.  "Watch your step," he thought as she sought passage through squares with leaves that were slippery from the dew he had made especially for her.
Behka's need for water and air encompassed her deeply for the fantasy. The scent of lilac stung her nostrils as her two eyes fixed on the space of soft white to the fore.  Slowly she found herself leaving the hues of her garden as a house sparrow whizzed by and startled her delicate dream.  Longing for the vastness ahead leaving behind the flutter of the butterflies and the wood of formed cypress trees for partial borders of thinly sown flowers she invented in her sight which "surely must be there," she mused.  She hunted no warning to the language of birds and their post. "There lies little room for wretchedness in this clear vapor of light," she thought to herself,  "He's immense with possibilities and mystery hiding the sun lovingly within his arms meant only for me."
Her pace quickened as he welcomed her to his world.  Behka  found herself in a twirl, dancing within the pockets of his air, moving about his arms in which he used to catch her with soft swirls of white. She delighted him so.  The silver chain that she wore sparkled faintly but beautifully against her skin as she reached to feel for it so she could know she was indeed there. The folly of all this glee spun her to a bit of a frenzy and she found she could not see and with every movement against her skin he would fade.  She grasped for him as anger rose within her.  "Why won't you hold me!” she yelled into the mist.  She began to feel small within his enormous space and a chill began to set in.  The mist tried to embrace her but he could not.  He found himself captivated by a lush garden ever so fair beyond a clearing just over the path.  The lushness of the maple trees empowered him with a desire to blanket her with dew and silence.
Behka collapsed in sweet tears as her fingers thumbed through blades of green, feeling unloved and unseen.  She lifted her head to see the slow moving vapors covering the garden next door, his powerful embrace fading every pastel petal of the peonies when she felt the warmth of the sun on her slender shoulder.  As she dried her gentle red cheeks worn with self-pity she began to feel her affection for the mist once again.  Behka wandered back into her house, crawled back under the covers and began to dream of mysteries that she wanted to feel and the mystery that she had surely felt, it was at that moment when she touched the stained blush of her cheek.
- Diane Powers
[Written for Migue's blog January 7, 2011.  Thank you for inviting me]
http://miguel-a-c.blogspot.com/
Posted by diane at 8:55 AM

I feel so honoured. Thank you so much Diane.
Your post was a gift for me :))).

Your deadline came at a painful time for me so I should be thanking you for giving me a project to work on...thank you Migue xo

so delicate and beautiful writing, you have so many talents dear Diane, I love them all

I love it...İt was so innocent story like your personalty Diane...heated my heart..:)

I don't think of my self as innocent but thank you so much for reading, I'm glad you liked it.

Well..İf you can punishing yourself its very good thing..But Sometimes a person can't be so global for about her or his personalty..Cause our eyes first searching negative things..But İn my opinon I'm pretty sure about that you have a innoncent heart and soul..Reaction not so important..How is her soul we have to look directly that point..We are not machine everbody live his own mistakes and İf you can punishing yourself its not problem...I'm not scare make mistakes..İts part of the being human..